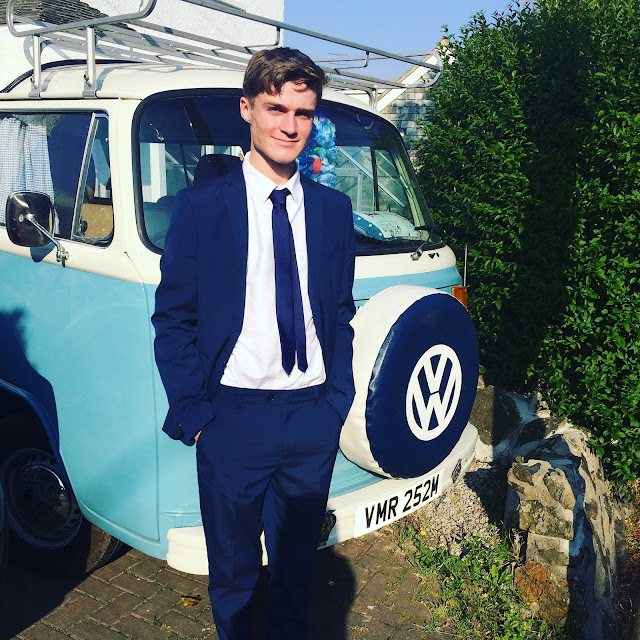 That there is Alf, suited and booted and about to go to prom. He wasn't going to go. I think he wasn't sure whether it was his thing. But he also didn't want to not go, just in case he missed out on all the fun. I must say he scrubbed up pretty well in his sharp suit and hair just so. He's the spitting image of my Dad when he was a teen. And my Dad favoured the Barack Obamaesque suit too. Those long limbs of the men in my family really do a tapered leg justice!

The weather was perfect for a prom venue overlooking the sea. The intense heat of the sun had settled into a balmy early evening, as all the year eleven kids gathered on the lawn outside of the hotel. There was nervous laughter, and some cracking dresses. Some arrived on quad bikes, some in limos. A couple arrived in a flash Bentley. Alf had to settle for my rust bucket, with a tired and teasy eight year old in the back seat. He jumped out the car, and disappeared into the crowd. I parked up, and stayed on the outskirts, looking for him but keeping my distance too. There he stood with his mates, hands plunged deep into his pockets, looking a tad nervous. He talked to his old rugby coach, and I was struck at how not so long ago little Alf would crane his neck upwards to listen to tactics from him.

Most of the teachers were there, looking on at these kids that looked oh so grown up. Alf's English teacher wandered around shaking hands with all the boys. He gave Alf a squeeze on the shoulder, as if to acknowledge the five epic years of teaching a boy who has really struggled to get to grips with secondary school. He never gave up on Alf. None of them did. Not even Ms Magnin, the French teacher, who battled with my son on an almost daily basis with homework and vocab.

Alf has been free of the shackles of school for about a fortnight. The moment he has dreamt about for so long is finally a reality. And guess what? He misses it. He misses the routine and the security. The knowing what's expected of him, even if he doesn't comply. He misses the corridor banter and the lunch time pasty. He misses IT and Drama. I think he's a bit bored of the late nights and morning lie ins. I've left him to his own devices, and let him wander the halls. I think he thought I'd have him up and dressed every day. But why would I? He's got a job at the pizza take away. He doesn't start college until September. He has the whole summer in which to do as he pleases. It just turns out that he hadn't planned for there to be so much time to fill.

He is much more chilled, which is very much appreciated. Just the odd rumble of thunder, rather than constant stormy weather. It's done me the power of good I must say. I think I'd just about come to the end of my rope with the constant battling. It had taken its' toil on us all I think. Olly is happier too, without an older brother that loves and hates him fiercely. Often all at the same time. Alfie has become a much nicer person to be around. And he is smiling, which was a rare sight indeed.

I hope that he is having a brilliant time. I hope that the after prom party on the beach is all that it should be. I hope he comes home late. I hope he isn't drunk. I hope he gets the girl. He's a bloody handsome bugger, with the most gorgeous green eyes you ever did see. He has bone structure that you could hang your hat off of, and is tall and elegant. He is serious and thoughtful, and doesn't suffer fools gladly. He is loyal, and will fight to the death for the underdog. Don't try to arm wrestle him either, because he is freakishly strong. He walks his own path, and knows his own mind. He is stubborn and argumentative, and can follow you around the house trying to prove a point. He is articulate, wilful and headstrong. If he wants to, he may just rule the world one day.

Here's to Alfie. My middlest. My hardest. My firebrand. I love all that stuff locked inside you. I would fight tigers for you. And I love your quiffy hair.