Of Time and Place

So it's the first day of half term, and St Ives is being hammered by rain. There's no chance that we will be venturing outdoors today, and so I have decreed it to be a lazy day all round. Olly and I are still in our pyjamas. He is upstairs waging war, Star Wars style. I have had several cups of tea, and a lovely trawl through my favourite blogs. I have the ingredients ready in the kitchen for banana bread, and I'm thinking of making some bread rolls to go with the vegetable soup. It's all about slow lane living today. 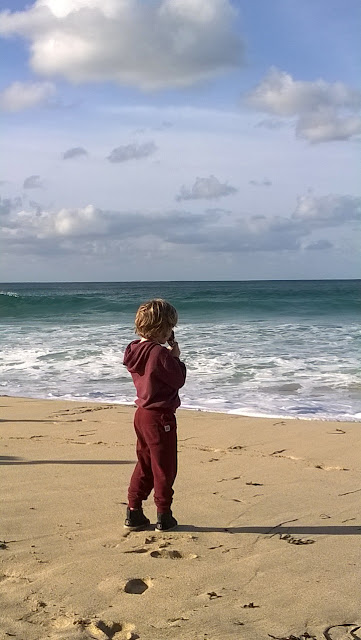 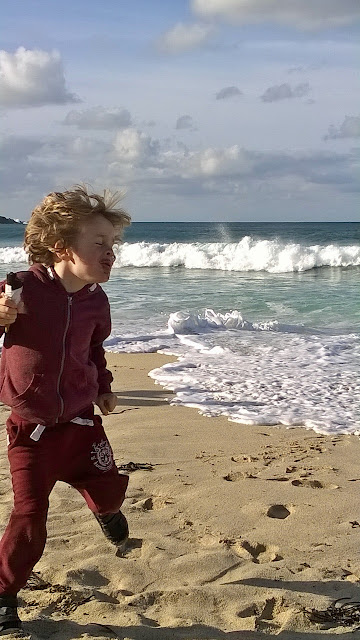 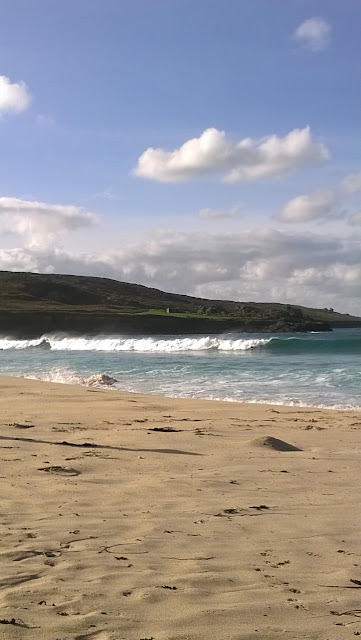 By contrast, yesterday was spent soaking up the half term atmosphere on Porthmeor beach. It was full of families enjoying the glorious sunshine, and taking advantage of the amazing surf that came crashing in from the Atlantic. Looking out towards the vast ocean, you could see the huge swells making their way towards the shore. It was an exceptional high tide, and the white sand of the beach was reclaimed with every wave that hit the shoreline.

The swells were mesmerising, and everyone on the beach faced the oncoming tide to marvel at the force and beauty of sea. Only the brave paddled out on their boards to meet the waves. The life guards had put up their red flags, and were encouraging children out of the surf. These kinds of swells can be dangerous, and it's easy to be dragged out and under by the waves as they crash and recede. Olly chased the surf trickles and foamy residue that the waves left behind. A vision in purple (he dresses himself nowadays. I say no more than that), he squealed excitedly as every now and again a wave caught all of us out and came at us from the side. Or just appeared as if from nowhere. Many beach blankets and pasties met a soggy fate, as the line of spectators worked their way further up the beach to avoid being soaked. 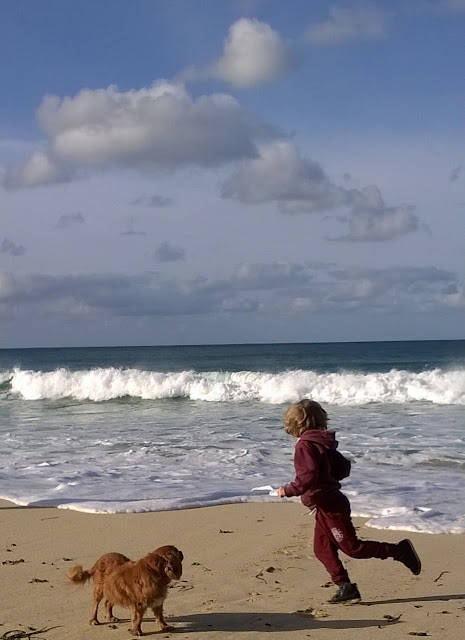 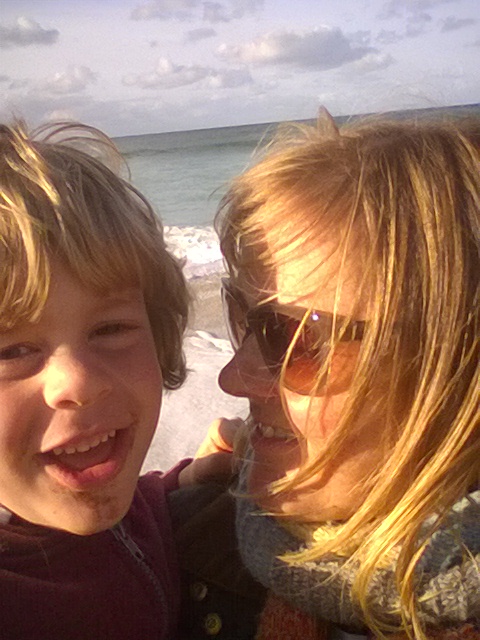 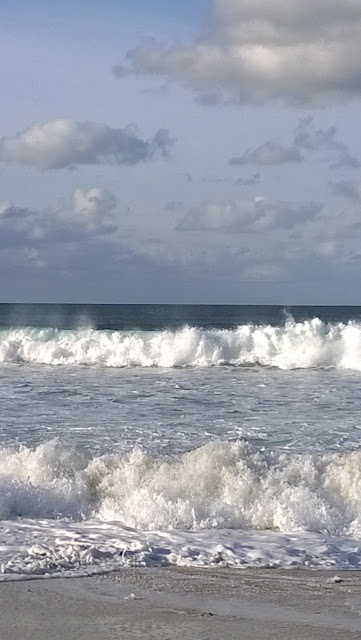 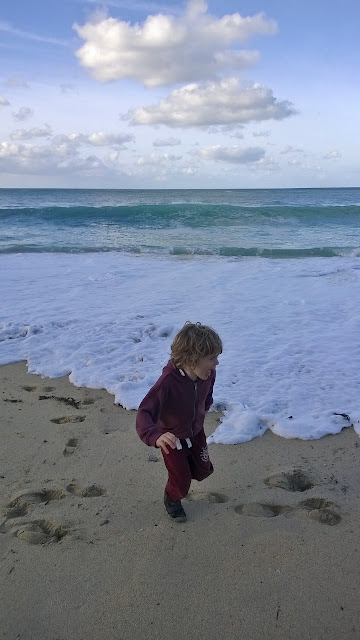 I'm currently reading 'Rising Ground' by Philip Marsden In it he explores the ancient sites of Cornwall, in order to understand the connection our ancestors had with the landscape in which they lived, worked and worshipped. I was reminded of a particular passage in which he talks about an immediacy of experience, and how that resonates back through time into our own pre-history. The idea that perhaps people have stood here looking out and marvelling at the power and beauty of the sea, just as we were now.

I wonder sometimes about that, as I cast my gaze back into a time that has been lost to us. An unrecorded time, that presents itself in tantalising manner with it's stone circles, barrows and the like. The cairns and quoits that are scattered throughout my part of Cornwall offer a glimpse into the people that lived here so many thousands of years ago. They left little trace of themselves, and yet they are a presence here all the same. Their legends and myths have journeyed through the ages into local folklore and fairy tale, and we are left grasping onto some sort of understanding about their lives. I find it fascinating.

Would those people have stared at the sea as we were doing now? Would they have felt the same awe and wonder? Would they have looked at it in a different way. Not simply to marvel, but to understand how to work with it for their survival? Would they have worshipped its' power, and feared its' ability to take what it wanted should it have a mind to? I'm sure they did and felt all of these things. But I also think their connection to place was more immediate for them, because they had a different kind of understanding and reverence for it than many of us do now. They lived in harmony, rather than at odds with nature. Their knowledge was passed down father to son, and their understanding was intuitive and a real part of who they were. 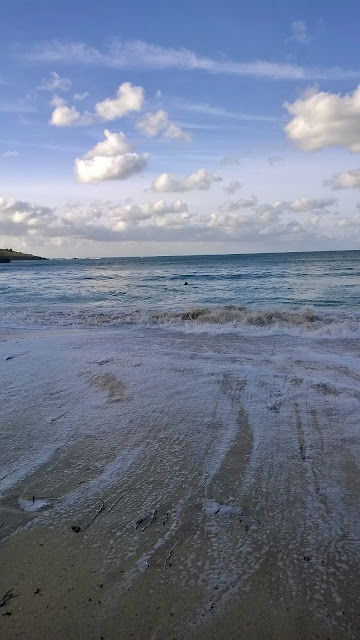 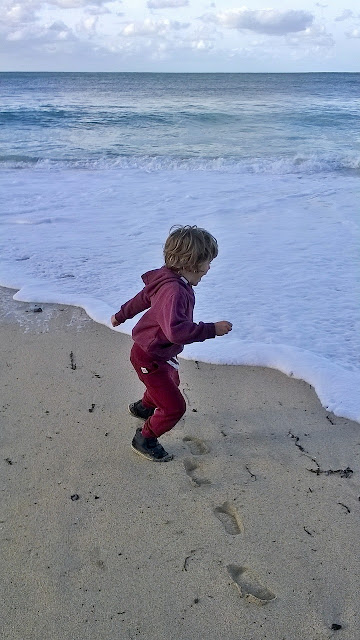 And would their children have played in the surf too? I suppose that childhood was something different then. In a time when you would not likely live to a great age, would a child have time to laugh and race away from the foamy edges of the surf. Would they play at the water's edge while their parents worked? I'd like to think that way back in time there were little boys like Olly, that hopped and jumped and laughed, and gave huge whooping cries of joy for the sheer pleasure they were feeling at that exact moment in time. I choose to believe that it was so. It satisfies the romantic in me.

There are plans for half term fun, even though the weather isn't on our side. But today I am adopting the policy of my ancestors; working with rather than against the conditions outside my front door.


Linking up with A Year In Books