Last year I was wandering around Sainsbury's, aimlessly putting stuff in my trolley, and then taking the same stuff out and putting it back again. I do this a lot. One thing about living in Cornwall - you ain't got much choice when it comes to browsing and shopping. I get pretty giddy when I enter a store that has different departments. We are a bit starved of it down here. And call me old fashioned, but I love to spend time just having a look around.

Obviously I was drawn to the bulb/seed section, and there were boxes of these bulbs at half price. Five bulbs for £2.50. I chucked a couple of boxes in the trolley, then took a box out again. I'd never seen or heard of these plants before. They looked at bit like a cross between and Alium and an umbrella.

I planted them in a new border that I had created at the end of last summer. I was so pleased with my cottagey corner, that I decided to extend it along the length of  the grass. It looks a bit patchy, this new bit, especially compared to the cottagey corner, which a year on is packed and plump with loveliness. I have high hopes for the whole border next year (if we are still here, that is. If not I will hand the baton to the new custodian of the garden). The Honeybells are at the back of the border, and look a bit lost. It's probably due to the sparseness, and maybe it's why I sort of overlooked them until this week. They don't have much around them by way of contrast, and blend into the background. 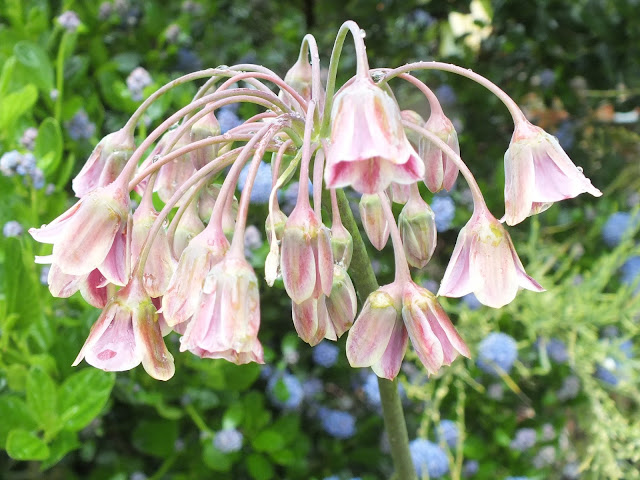 But oh how I wish I had bought boxes of them. It's not for their striking colour, although it is a very pretty
shade of blush pink. It's not their perfume, because I don't think they have any. They have been steadily growing upwards for about two months, maybe more. It has taken ages for their flowers to escape its' encasement and open up. But this week the Honeybells must be giving off some sexy signals, because they are literally weighed down with pollinating insects, especially bees. The bees seem to be in a frenzy around them.  I can't tell you how much pleasure it gives me to hear that happy humming sound in my garden.


So I was wondering whether any of you out there would like me to write a post about some of the bee friendly plants that I have planted? Or maybe you would like to share some of your own with me? Perhaps a post a week, giving some information and pictures, so that you could maybe be inspired and inspire me in turn? I am really only a beginner at this gardening lark, but my intention of attracting wildlife into the garden has made it much more fun. And it would be nice to share what I have learnt along the way. My garden is not big, but I have been amazed just how much variety can be grown given a little imagination and a lot of bravado!


Tell me what you think!