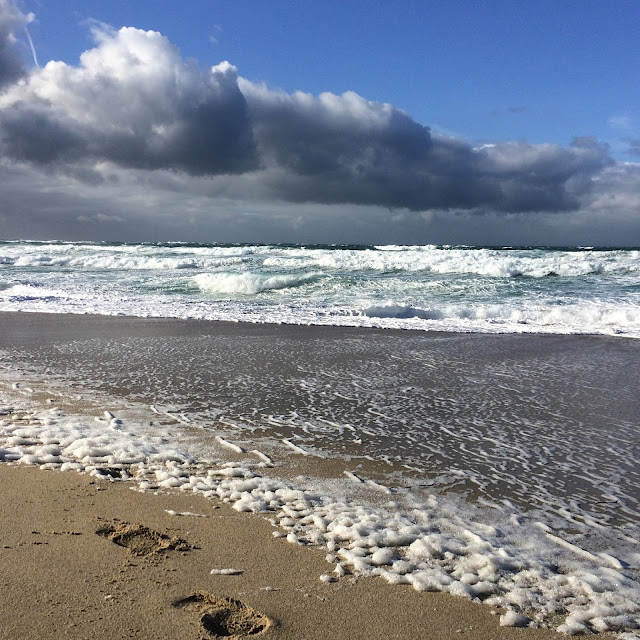 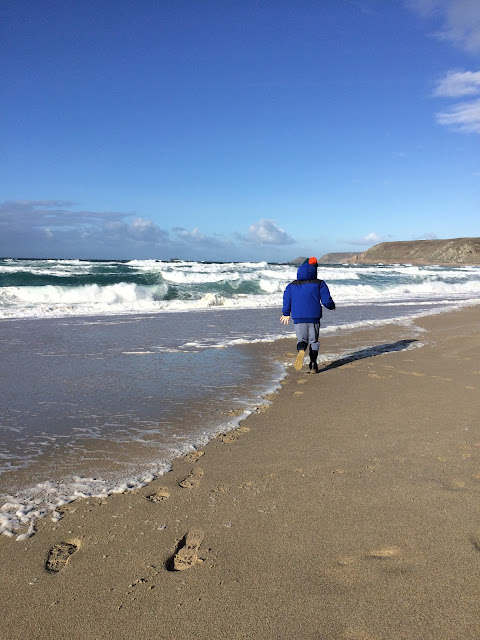 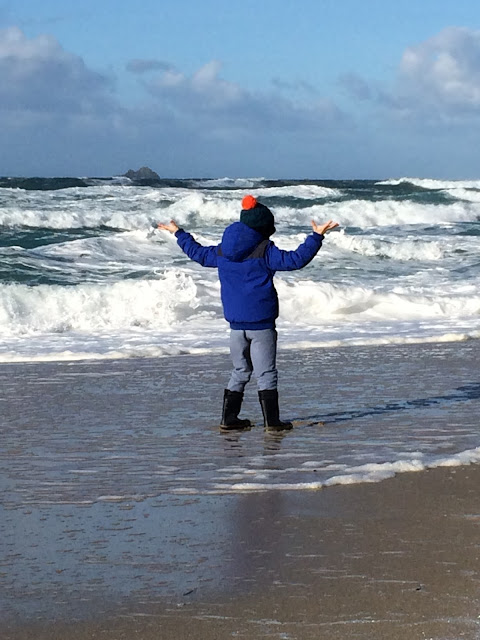 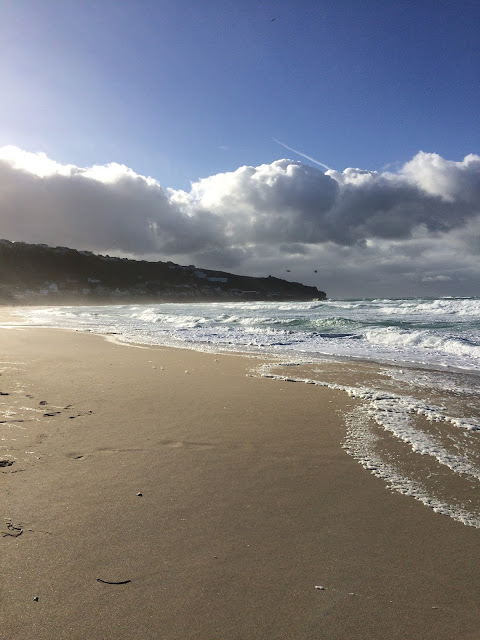 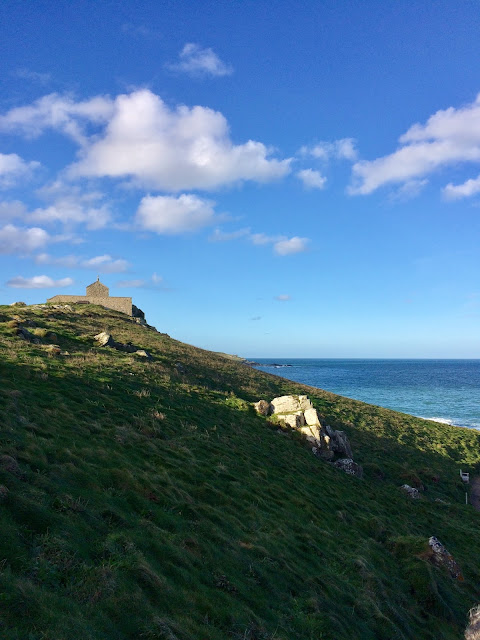 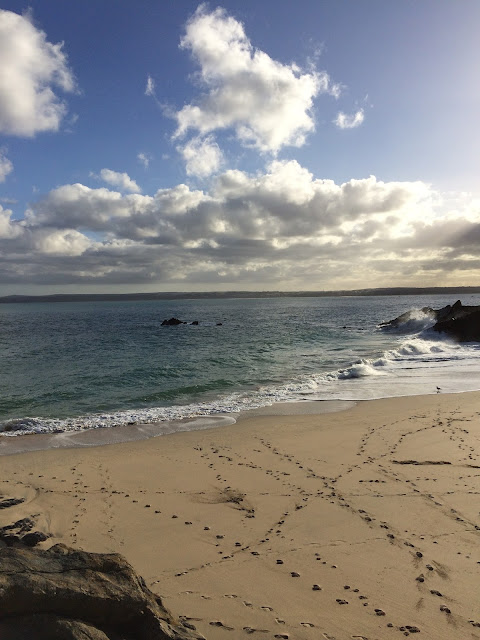 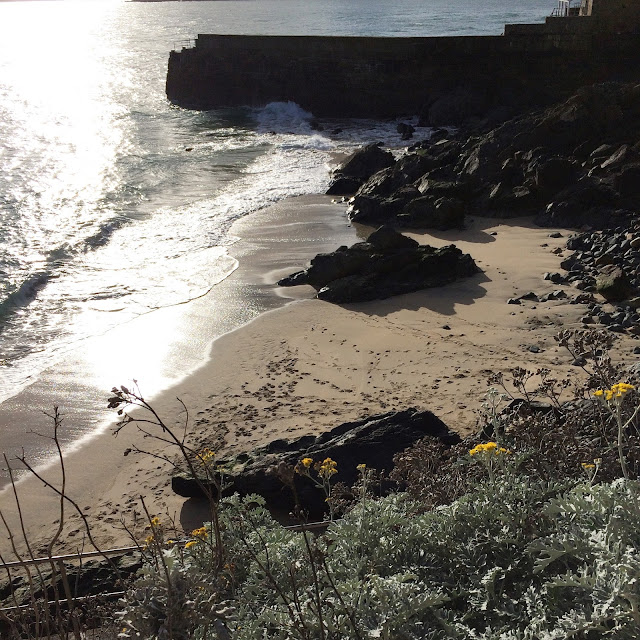 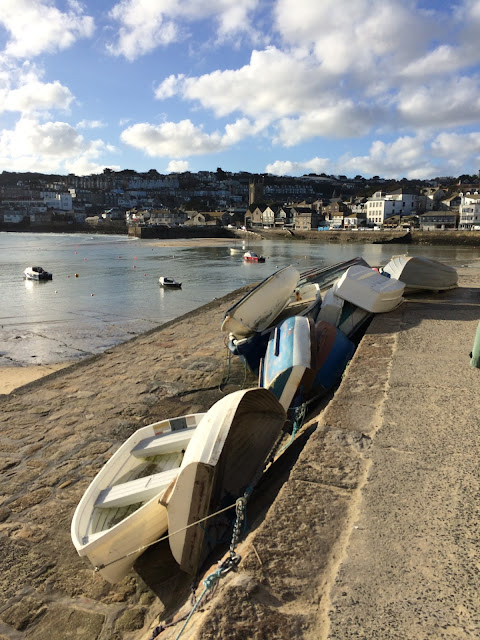 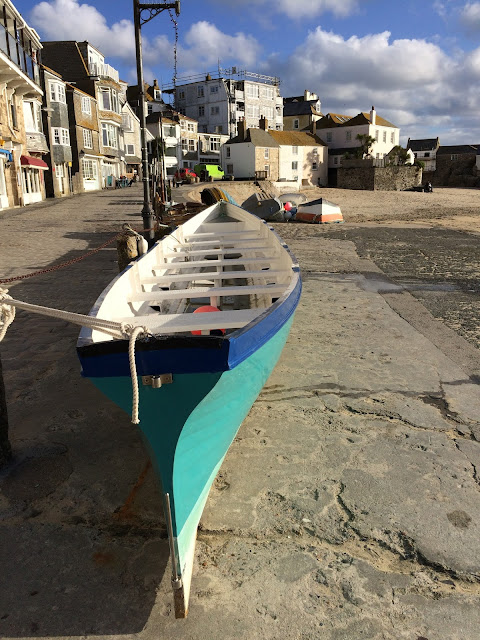 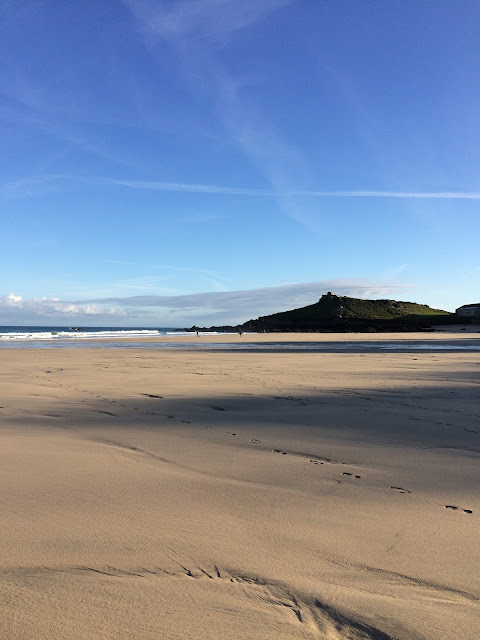 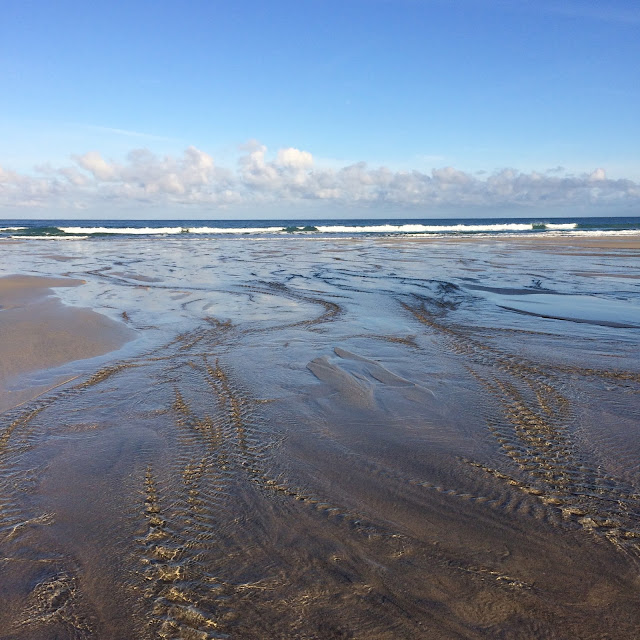 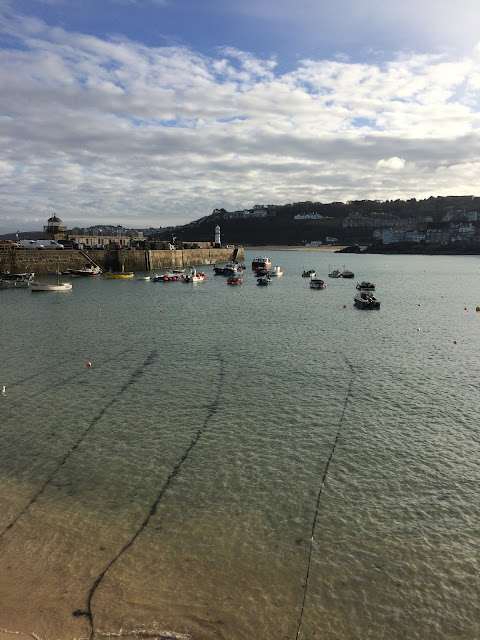 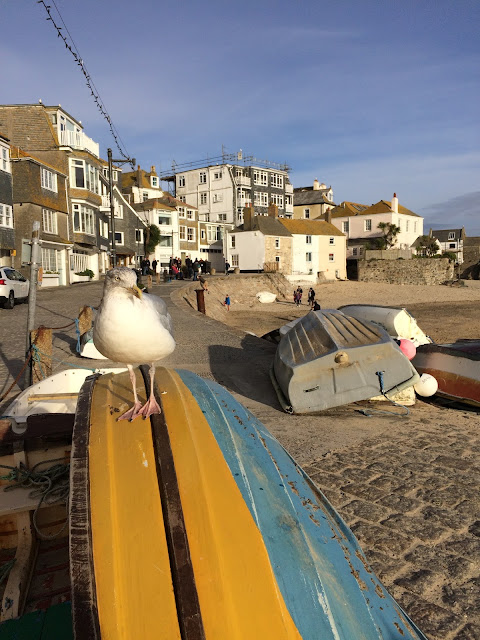 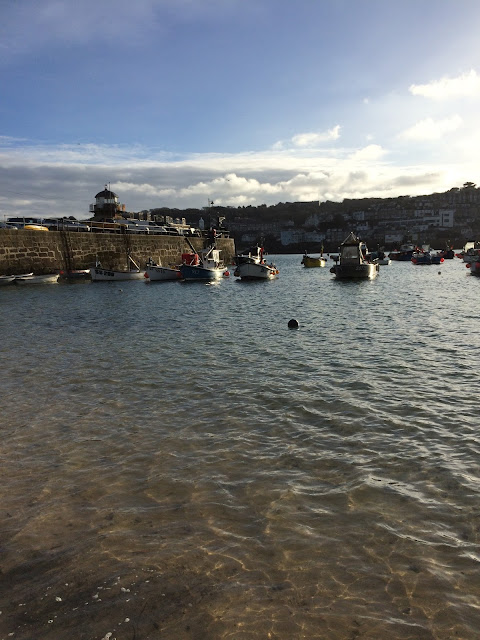 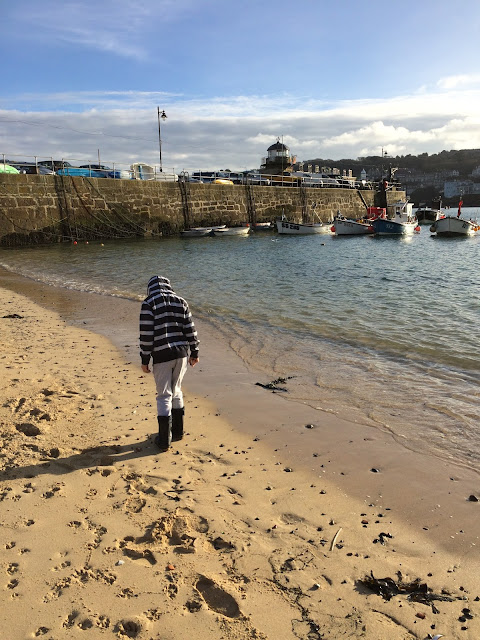 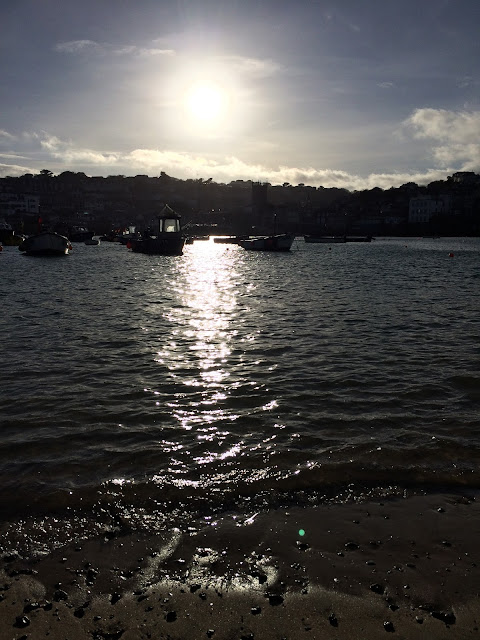 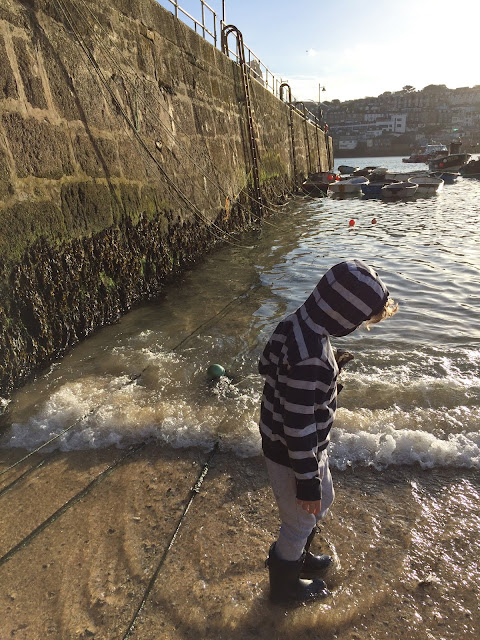 That's what I've  been lately.

Blessed with fine weather, empty beaches, tideline treasures and skies that go on forever. And I know that people bang on about it all the time, but the light here has been exceptional. Crystal clear. Sharp as a tack. Punching well above its' weight. And with that clarity comes those contrasts of colours that lift the varying hues of blue, brown and green around us.

Sand is not just an expanse of flat colour. It's a myriad of twinkling forms, with each grain vying for attention. The foamy surf beguiles with its' cotton candy tufts that advance up and over our wellies, before retreating into the swirling mass of the ocean. The blue sky seems huge overhead, like a silk parachute rippling ever outwards. I feel enveloped by it all. Not in a manner that can overwhelm, but rather included as a valued member. I feel that I intrinsically belong.

Last weekend, Olly and I were lucky enough to find By The Wind Sailors and Goose Barnacles on Sennen beach. And a teeny tiny star fish too. The barnacles were attached to a green plastic bottle, discarded by the retreating tide in a rock pool. By The Wind Sailors had likewise been washed up on the strandline. They shimmered in the sunshine. An iridescent blue, that wouldn't have looked out of place at a seventies disco. Olly was fascinated; he doesn't remember seeing them before. There were lots of cuttlefish remnants too. The bit that you sometimes see hanging in bird cages. Watching Planet Earth 2 that evening, we were transfixed by the footage of a cuttlefish in action. How they can bewitch crabs with their undulating colour changes. It was difficult to equate this amazing creature with the bleached white bone on the beach.

This weekend we stomped down into town and headed for harbour beach. Stomped is indeed the word, because Olly really didn't want to go out. His pouting lips and glaring eyes made it quite clear that he would have much rather stayed at home lounging in front of the tv. And maybe I would have let him. I do sometimes. I think he was glad he went. We went hunting for sea glass and pottery shards. He has the best eye out of any of us for it. It is one of the most enjoyable pastimes to be had. Grubbing about at the water's edge, looking for treasures. There's a pile of our spoils on the windowsill in the kitchen. A solid spray of blue, white, green, brown and pattern that we will sometime pop into bowls scattered around the house. Our seaside spoils.


I hope that you are all well?