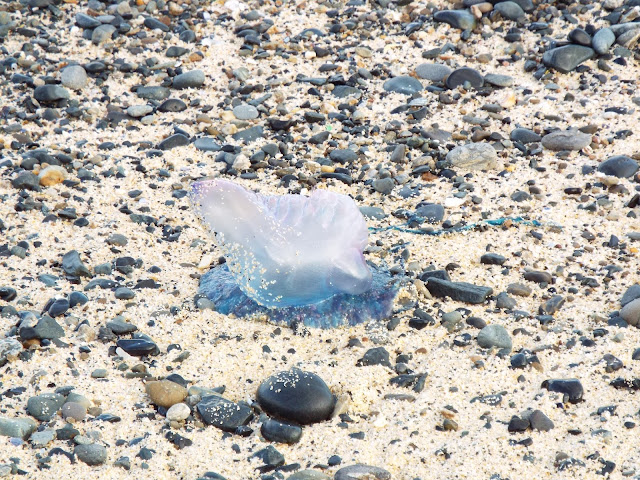 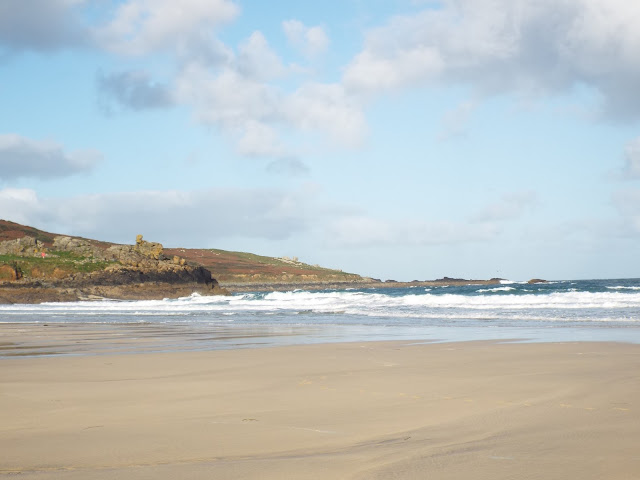 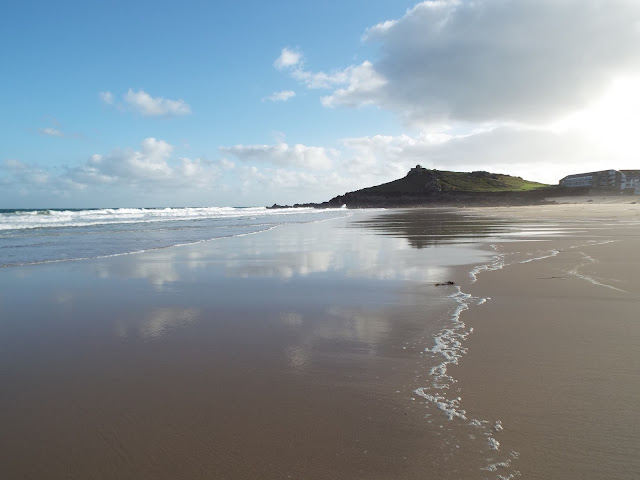 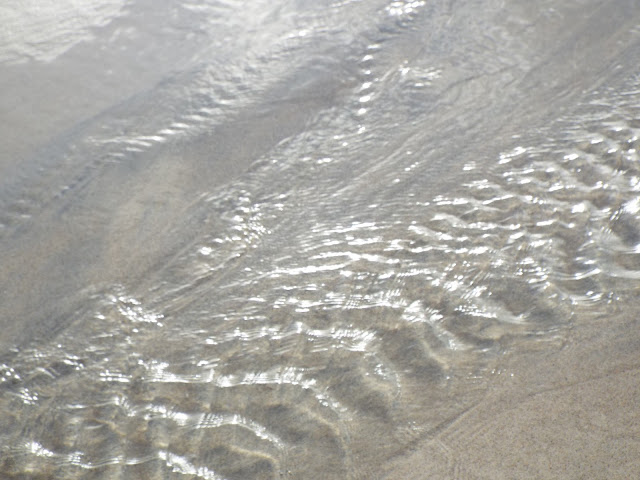 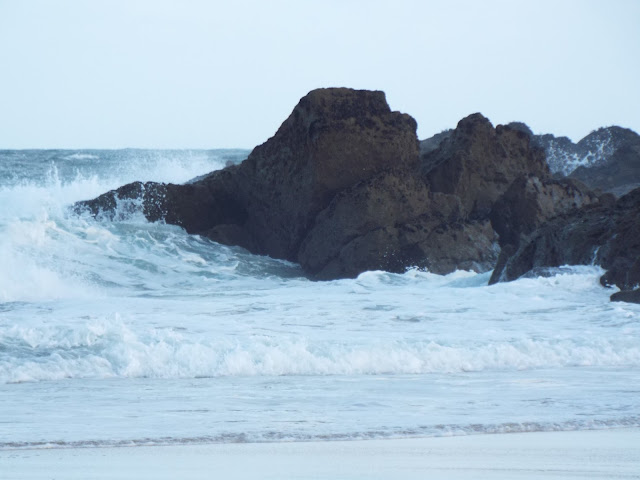 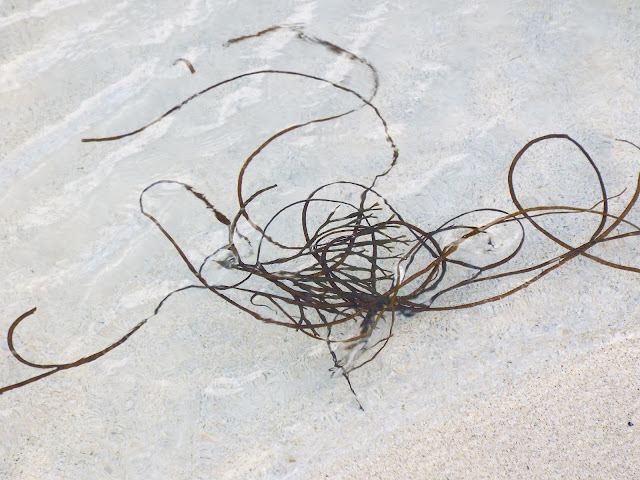 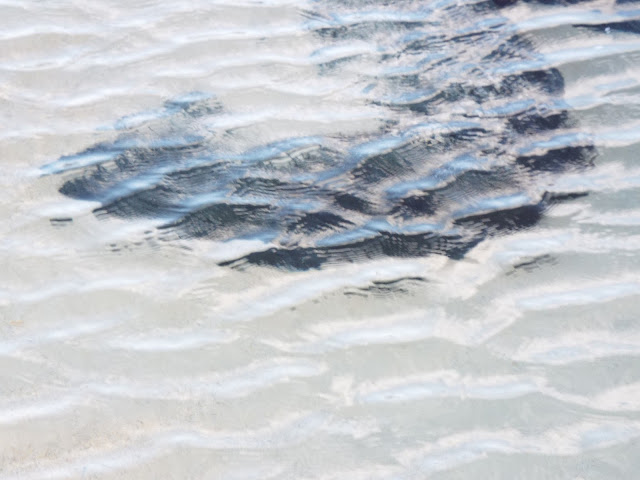 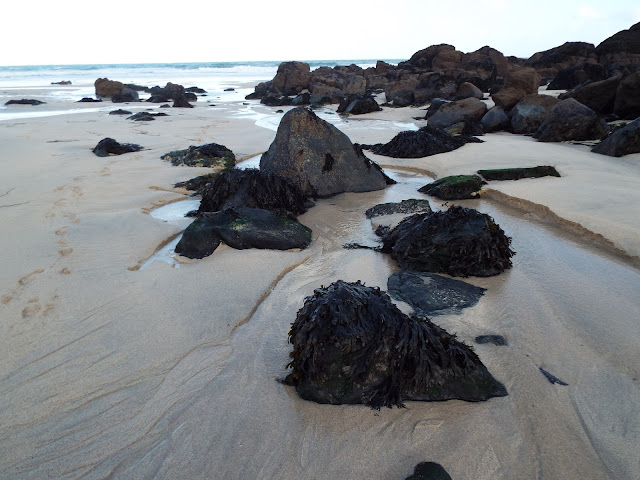 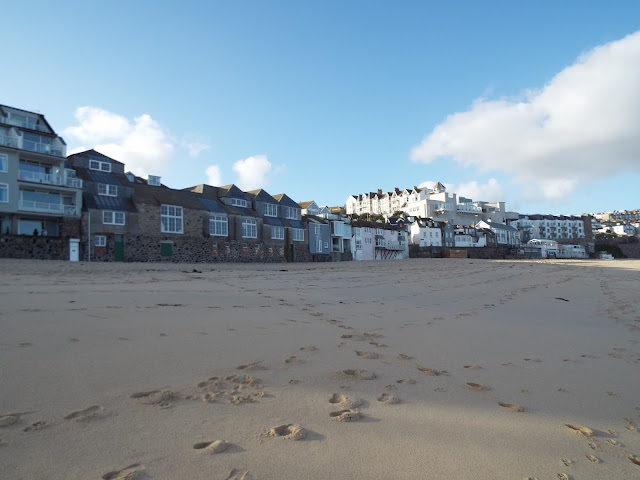 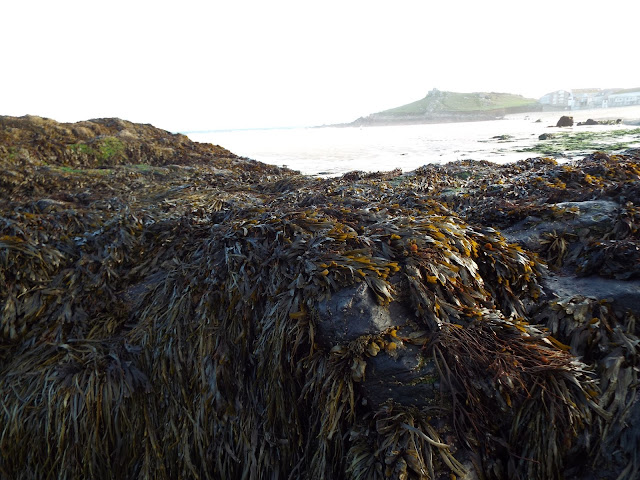 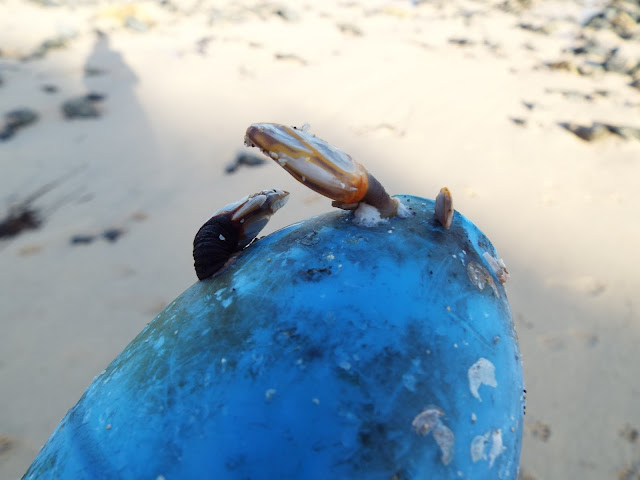 The photos above are from last week, but the weather today has been very much the same. A lovely,  warm, crisp Autumnal day. I've managed to walk the beach most days with Honey, and it's been a real tonic to take my shoes off (flips flops or die until November), paddle in the foamy surf and feel the sand between my toes. The summer wasn't the best here in St Ives, and my days off from working were just not beach worthy. I'm hopeful that Olly and I can venture down this weekend. I've promised him a trip to the cinema, but am thinking a pasty and a play on the beach first.

It's the absence of the windbreak that I love. And the reclaiming of space. It's quite hard to beach comb and grub about for nature when Porthmeor is full to bursting with visitors. We are still busy here, but not so many people venture onto the beach. They stick to the other delights that St Ives has to offer, and tend to cast admiring looks at our sweeping stretches of white sand from a distance. I guess that's what a zoom lens is for. I sometimes think that they are missing out, but on balance I'm quite happy for them to stay up there.

We've had lots of Portuguese Man Of War wash up along our shores. Spectacular creatures, with the most amazing iridescence in their colouring. Highly poisonous of course, and dog walkers are wary. Luckily for me, Honey takes no notice of anything when she's carrying her ball, so I have been able to get very close to them. I had never seen them before last week, and was enthralled. They were enticing, and I had to really resist the urge to touch or stroke them. Anyway lots of photos and videos were taken of them to show Olly. Who is struggling somewhat at the moment, bless him.

He has found the transition to junior school very difficult. The infants and juniors are different schools here, and routines, rules and all that goes with it are new for him. Unfortunately, he's regressed back into old patterns of disruptive behaviour and is challenging boundaries, both in the classroom and at home. I do feel for him. He's a complex little boy, who can find it difficult to engage effectively with his peers. He can push others away with words or defensive actions. He's eloquent and quick witted, but this can turn sharp and he can often end up upsetting others. It's really tough to be the Mum of a child who you know is utterly fabulous, and yet acknowledging that their behaviour can be unacceptable for a lot of the time.

Olly has a lovely teacher, who is working hard with him in the classroom. He has a token in his pocket that he can raise into the air if he's feeling agitated. It helps him to manage his feelings and behaviour, and also alerts staff so that they can deal with any issue in the moment. She has also made him a monitor to give him some responsibility in the classroom, especially during the transition parts of the school day. He enjoys this very much, and today helped her to use the guillotine. It was all he could talk about on the way home from school. I have hope that he will settle down eventually, but honestly there have been moments (yesterday evening comes to mind) when I'd love to be the Mum of three laid back, socially adept kids. I envy those who breeze in and out of school, unaware of the stress of the 'walk of shame.'

I know I've written these tales of woe here before, and I also know that there's not a Mum out there that has it easy every minute of every day. All of us have our own light and shade, and so do our children. I was a very socially awkward child. I never knew the appropriate reaction to a situation. I wasn't a child with a ready smile, or a cutesy face. I was more liking to be picking the scab on my knee or kicking the bus stop, than grinning at the elderly neighbour or charming those around me. I am not, and haven't been that person for longer than I was. So I grit my teeth, and keep plugging at this parenting lark. Like we all do.

Work carries on apace, as does running. I'm back up to three runs a week, and am gearing up to try and fit in a fourth. I run about five miles, which takes me about forty minutes. It fits in with work, dog walking and all the other stuff  that I have to cram into a school day. I'm happy with that. My latest challenge to be able to run up a particularly steep and winding hill in one go by the end of November. At the moment I can get nearly halfway before I'm bent double, with my hands on my thighs. I'll get there. I enjoy running during the Autumn so much more than any other time of the year. The heat has gone out of the sun, and so I'm not sweating like a bull mastiff five minutes in. The roads are quieter (my route takes me along the back roads for some of the run), and I'm not getting heckled by drivers who seem furious that you are on their turf. I run at the edge of the road, and am very visible. I expect they treat cyclists in much the same way. I don't get it though.

I am also counting down until Mum comes to live in St Ives once more. She will be living with us until at least after Christmas, so I have been sorting out the house in order to accommodate another person. For the time being, she will be sleeping in Sam's box room. But when he comes home for Christmas, I'll be turning the conservatory into a private space for her. It's the best I can do, but I feel bad that I can't find her anything more permanent. And although I know that she won't mind at all, I mind. I mind that she is coming down here, to be shunted around. She's such an amazing woman, and life hasn't been kind to her in her later years. I'm hoping that I'll be able to score her a reasonably priced rental after Christmas, and that she can start to make a real home for herself. I just want her to have her own front door. And maybe a cat.

I've also bottled putting up a short story that I've recently written. I need to be in a 'sod it' kind of a mood to hit publish, and I haven't been. It's daft really, but there you go. The thing is if I don't do it soon, then this blog of mine will disappear in the ever decreasing circle that it's in. I feel as if it needs to evolve a little, or else it will just run out of steam. I do feel as if I'm just repeating the same subjects in much the same way, over and over again.

Anyway, there you have it. A little bit of candid musings during the witching hour of a Thursday afternoon. This evening I hope to be drinking all the tea and settling down to the new David Fincher produced Netflix series. It's called Mind Hunter, and I'm terribly excited about it; pyschopaths, profiling and pyscho babble. All from a perspective of truth. I literally cannot wait!

Love to you all,