I'm thrilled to have been asked by Sarah over at Mitenska to contribute to this monthly series. She asked herself, what makes a thing precious? And which precious things would she take from her home if required? So for the past week or so, as I've gone about my business here at Today's Stuff, I've been looking at my things in a different way. What do I consider precious? If I had to exit stage left in a hurry, what precious things would I want to take with me?

As I've looked and thought, I've been rather surprised at the things that I would choose, and the reasons why I would choose them. Most of them have no real material value Any value they possess is purely sentimental. They evoke memories, which in turn send me to happy places. And like a line of dominoes, they topple into other thoughts and memories that lead down a spiral of reverie (and a slight case of self indulgence too..) 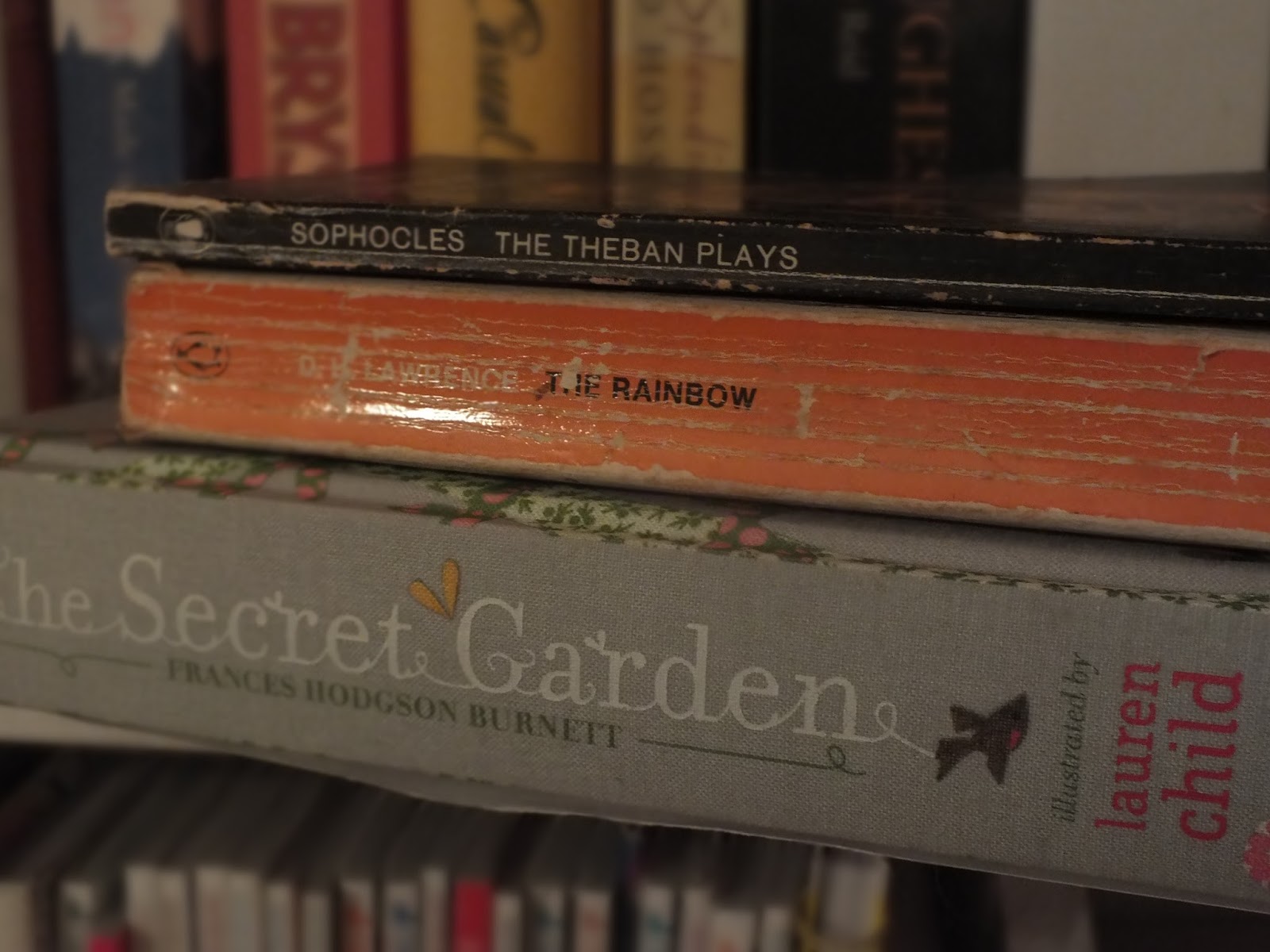 I would start with my books. I have a lot of books. But there are three books on my bookcase that I would feel compelled to take with me. These three books have probably had the most influence on me as I grew up. They are well thumbed, and two are falling apart at the seams. I cherish these books as old friends. And it's not just the book themselves. It's what they represent.

The first time that I read 'The Secret Garden', I was transported. I pored over the descriptions of the landscape and the way that the characters spoke. I was fascinated with the idea of finding something hidden and secret. I think I borrowed it from the library at least half a dozen times, and that Christmas there was a copy of the book in my stocking. I loved this book. I still love it.

In the book, it is a robin that shows Mary the way. I had a robin that showed me the way once. I was struggling with post natal depression after Samuel was born. I was living in commuter belt hell, with no friends or family nearby. Marc worked long hours. I rarely got dressed. It was a tough time. But there was this one morning. I was outside in the garden, and a robin was sat on the fence. He was singing. I stood and watched him for a while, and I thought to myself  'It will be ok. I will be ok' That robin was a saviour of sorts. I cannot think where I would be now if it weren't for him.

'The Rainbow' was one of the first grown up -  intellectual even - works of literature I read. It was a set text on my English Literature A Level course. There are notes scribbled all over the pages of this book. There are also my attempts at practicing my signature in there too. And some rather dubious graffitti. I thought Lawrence was the business. Forget Plath, Lawrence was the man upstairs. I used this book as an accessory to demonstrate my intelligence; casually getting it out of my bag on the bus back from college. I devoured everything that he wrote, while trying my hand at writing some angst ridden, Freudian-laden nonsense of my own.

This book, more than any other, defined the gauche young woman that I was. I read it whilst undergoing a period of experimentation and change. I flirted with all sorts; drink, drugs, fashion statements. I ditched the drugs (apart from the ciggies), became attached to cans of Red Stripe at clubs where R&B was played and discovered the ubiquitous uniform of Levi 501s and a Breton tee. I emerged from the other side of my affair with Lawrence a bit less of a duckling, with a fledgling acceptance of me, myself and I. I learnt important life lessons while studying David Herbert. I have a lot to thank him for.

I studied Classics at University. I know. Useful. It was these three ancient Greek plays that led to four years of deciphering archaic languages, learning about age old cultures and falling in love with a world glimpsed through the eyes of the ancient poets. Going to University was a massive deal in my family. I was the first one to do so. My Dad took me to Georges book shop on Park Street, and together we bought the books on my first year reading list. This was one of them. A trio of plays from an ancient world, bought for me by a man who thought I was off my head when I didn't take that job at Sainsbury's, but bought me the books, and sent me on my way towards life changing experiences, enduring friendships and a deep love of gin.

Three precious things. Three books that are a little part of the story of me.

You'll find the other contributors to Precious Things over at the following blogs. Please go have a look!